PIR Motion Detector (imitation) with FULL HD camera spy hidden with IR LED 5m + WiFi support (Android and iOS). Live video stream during the day and night anywhere, anytime. The spy camera has FULL HD 1080P, motion detection and the wide-angle camera lens with an angle of view of up to 145° is unobtrusively masked in the PIR motion detector. The camera is powered by a rechargeable battery with a capacity of 4500mAh - it keeps the camera in standby mode for about 1 year. The camera is controlled via a free mobile application that is compatible with Android and iOS. It has a two-way audio function - allows remote communication - you can talk to a person at the camera via your smartphone, from anywhere in the world. The recording from the camera is stored on a micro SD card, which is supported up to 64 GB. The camera has a powerful invisible IR LED light for night vision, which has a range of up to 5 meters and can record video even in complete darkness. The sensitive CMOS lens records video with sound in FULL HD resolution of 1920x1080 pixels at a frame rate of 15 frames per second and is compressed in H.264 format. Thanks to the Wi-Fi connection, you can watch video with audio in real time on your PC or smartphone. The camera works with Android and iOS operating systems for mobile phones, tablets. After downloading the free mobile application, you can control the camera via your phone. In the application, you can adjust the recording quality, sound, rotation and flip of the image, and so on. You can also set motion detection, night vision and view the stored recordings in the camera. It is a multifunctional device that can record real-time video or take photos and has a motion detection function (to save space on a storage medium). All data is recorded on the external memory of the micro SD card up to a maximum size of 64 GB for long-term recording (SD card is not included). The camera can be connected through WiFi via a phone or tablet with the Android or iOS operating system. It is the perfect tool for indoor monitoring. The camera broadcasts a "LIVE STREAM VIDEO" - live video that you can watch wirelessly. When connected via a Wi-Fi router, you can watch the camera image anywhere in the world. When motion detection is detected, the camera sends an email notification. The two-way audio function - allows remote communication, you can talk to the person at the camera via your smartphone, from anywhere on earth. An inconspicuous camera hidden in a motion detector will find its application in the home, office, classroom, shop, cottage, warehouse...

Camera hidden in a motion detector

Night vision up to 5 meters 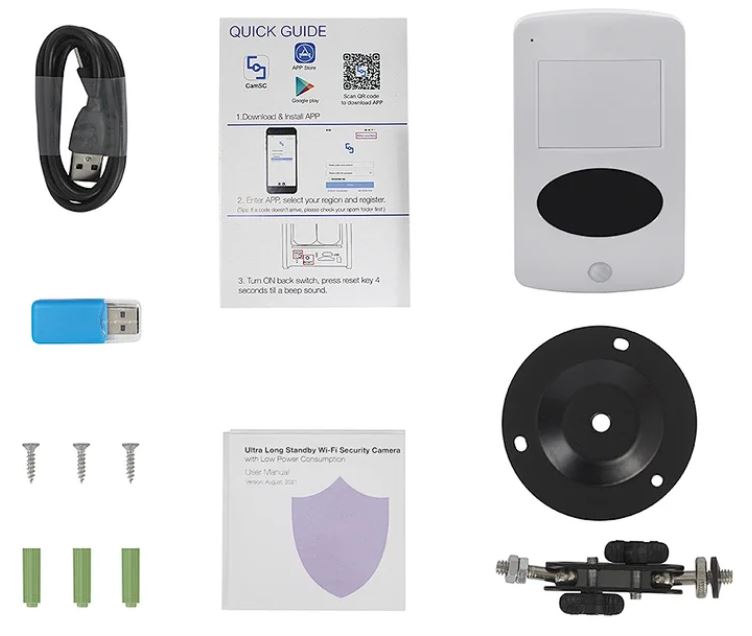