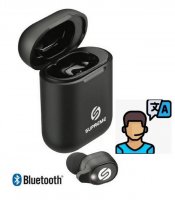 Translator via headphones with case and charging dock and bluetooth connection with Smartphone - Supreme BTLT 200. Online and offline translating bluetooth headphones 2in1 for Android & iOS with two-way instant communication in real time. This powerful Supreme BTLT 200 offers 6 different translation modes for all your translation needs, with real-time bidirectional translation in more than 33 languages. And it has easy use and great features. The translator helps people get closer and traveling around the world is much easier and safer. This digital interpreter can without a doubt become your most valuable tool in a foreign country. The application to control the translator, as well as all future updates, are completely free for the owner of the SUPREME voice interpreter.

The most important features of the pocket translator include two-way voice translation in real time and the ability to receive calls and listen to music.

The online travel translator has mini compact size of 38 x 22 x 54 mm and the weight of the charging case is only 22,4 g. It has a battery capacity of 50 mAh with continuous operation for up to 3 hours (up to 120 hours in standby mode), charging the battery takes about 2 hours. The dedicated application is compatible with iOS and Android devices. Speak all languages ​​using this real-time language translator that can translate spoken languages ​​into your native language and vice versa. With the accompanying mobile application for Android and iOS and the dual-channel Bluetooth 5.0 handset, it is a truly excellent technological experience. Do you like traveling, work in an international environment or want to learn new languages? We have the perfect solution for you - SUPREME BTLT 200 portable headset translator, a simple device that translates your conversations in real time! When visiting a foreign country, the language barrier is one of the biggest problems. An intelligent speech translator with a free application can instantly translate what you say in real time and play it back to locals in their native language. Subsequently, what they say will be immediately translated back into your handset. With the Supreme BTLT 200 voice translator, conversation is easy even in a language you've never spoken.

There are several translation modes. Face-to-face translation "FACE TO FACE" in case the user wants to communicate with people personally while traveling. Meeting mode "MEETING",  communicate in real time with people at a meeting, conference or seminar, everyone speaks and listens in own language. Or during a business meeting, for a group translation for real-time communication "GROUP TALK" with several people anywhere in the world, each in own language. "DIRECT TALK" - instant translation for private verbal communication one to one, with anyone around the world. And broadcast mode "BROADCAST MODE" to talk to a group of people in a meeting, each in own language. The translator also has a built-in "LANGUAGE LEARNING" language lector who can help people practice and learn a foreign language. It currently supports more than 33 languages ​​and provides verbal and visual translations covering all the basics.

The device is not only an excellent translation handset, but also ensures clear and stable phone calls. The design is ergonomic and light, comfortable for your ear.