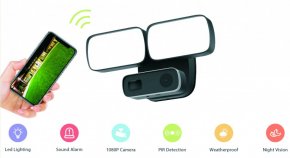 PIR camera FULL HD WiFi with 2 LED reflectors 24W with IR night vision. Equipped with a two-way audio speaker + siren and you control everything via the app on your Smartphone. Guardian of your property during the day and night. WiFi camera with LED reflector and motion detection, with night vision and siren, with IP65 protection (dustproof and against splashing water). Multifunctional security camera in LED reflector 24W with speaker. This smart surveillance camera captures image in Full HD resolution - 1920x1080 pixels.

It has a built-in wide-angle PIR sensor for motion detection, the sensor captures only people, does not respond to other objects and animals. The recording from the camera is stored on a micro SD card, with support up to 64 GB, you can also upload pictures and videos directly to your mobile phone via a mobile application and Wi-Fi connection. The reflector and camera are on a flexible joint, for precise adjustment of the camera's angle of view and motion detection, and for adjusting the light direction of the reflector. The camera is made of aluminum, what guarantees a robust construction and durability. Thanks to wireless Wi-Fi technology, you can connect the camera to your Smartphone very easily. The light camera is designed for the exterior, is water and weather resistant with IP65 protection and can operate in the temperature range of -25° C to 65° C. You can place it above the front doors, windows, garage, etc. The camera has a viewing angle of 120° and a PIR motion detector up to 120°. The camera is powered directly to the electric main source via AC/DC adapter.

You can control the camera via the mobile application. It allows you to monitor "real time" video and audio transmission. LED white light with a power of 2400 lumens (24W). The reflector above the camera can be set to constantly ON, automatic (when motion is detected), or OFF. The camera has night vision with automatic switching on of IR LED lights at reduced visibility for a great image even during complete darkness, without the use of an LED reflector. With such a way, the unwanted visitor will not even know that the detection and recording have been started. You can record color image during the dark - at activation of the LED reflector when detecting motion, or black and white at automatic IR LED lights, with the LED reflector OFF.

You can also run a SIREN (to frighten an intruder) via your mobile phone, with a power of up to 110 db.

You can also set the siren to launch automatically when motion is detected. In the mobile application you will also find a quick dial for calling the police in case of danger.

With two-way audio with a built-in speaker and microphone, you can communicate with the person at the camera.

Thanks to the loudspeaker, you can talk to the person in front of the camera, for example, from the comfort and safety of your living room, without having to walk to the door. Night vision with IR night LEDs up to a distance of 12 meters.